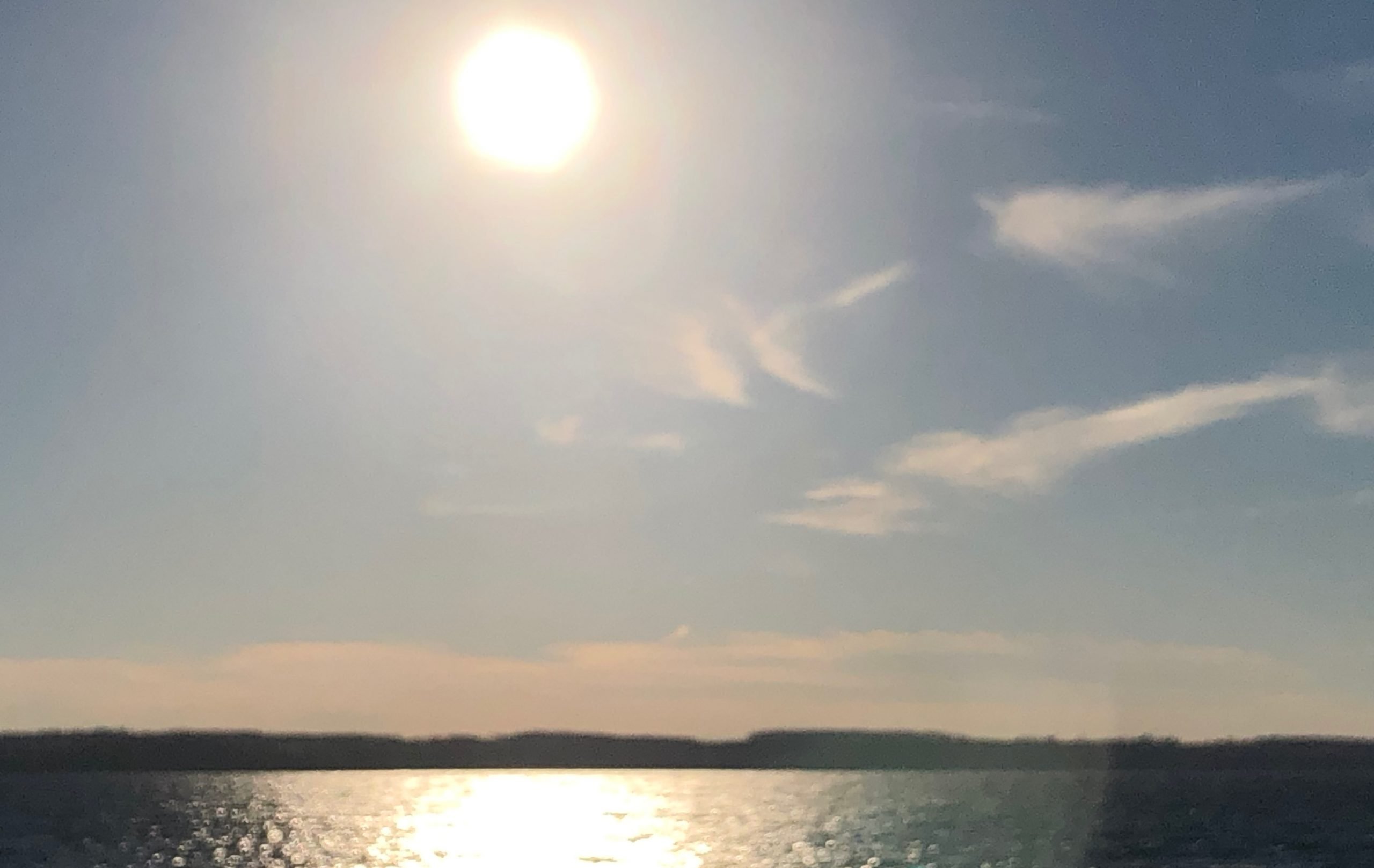 From the waterfront in Geneva, the sun seems to rise from behind Vintosa vineyards. On a clear morning a finger of yellow or pink fire curls over the slope on the east side of Seneca Lake. Light from the center of our solar system splashes over the water sprinkling diamonds as it spreads our way.

Piercing the lucid liquid, light is refracted by waves. It bends and courses through any barrier to reveal with stunning clarity the stones and sand. It also infuses every molecule of space above the surface around trees, grass, sidewalks, and people. Playground equipment, light poles, and even trash cans become mediums of art for the sun that crafts dark shapes from motionless postures. So too the heaping highway berm as the rising sun crosses the road and aims its rays toward the dog park, simultaneously moving up the hill splashing the back side of houses on South Main. Fence posts around the dog park cast black stripes over the ground while the naked early spring trees form ghoulish shapes upon the dead grass between them.

There is no parsing the truth that a new day has dawned. On cloudy days, when a low ceiling forms just above the houses, and light is a dreary changeless gray, what time it is can be argued in a resistant mind. But when the house becomes a shadow itself, the early spreading light crawling up its southern side and washing over the roof and gutters, there is no question about what day it is: a new one.

Mary Oliver has a poem entitled, “The Sun” — look it up if you like, but here is a line that came to me this morning.

“…and have you ever felt for anything

do you think there is anywhere, in any language,

as it warms you

as you stand there,

Such is the experience of gratitude with at least a little awe mixed in. It is non-transferable but when wrapped in its arms there is a deep yearning to share it nonetheless.

That is what art is, it seems to me. The desire to share non-transferable experience in the hopes of it connecting with others. Whether painting, poetry, theater, music, or sculpture the artist renders her or his medium in hopes that a particular experience will be shared. It may or may not, but in the end the artist has entered the moment and stood empty-handed before it, and that is a gift in itself.

There is a perversion of this that is not art. Many politicians and political advocates attempt the same thing, only they are mostly one-note artisans rather than artists, and they use fear as their medium. It requires much more skill to voice insight and truth through beauty and light than darkness and dread, not to mention complexity and nuance rather than flatlining a single thought or emotion.

After Oliver asks if the reader has ever been captured by the joy of standing empty-handed before the sun, she asks:

“…or have you too

turned from this world–

or have you too

It is a new day, let’s move out into the light — together.

NOMINATED FOR A PUSHCART PRIZE 2020 Unsolicited Press (Portland, OR) chose "Cairn" among its many fine publications this year, as a nominee for one of the most respected literary awards in the … END_OF_DOCUMENT_TOKEN_TO_BE_REPLACED