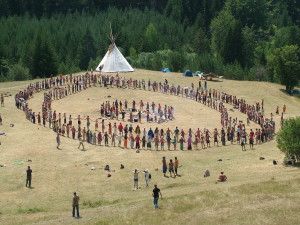 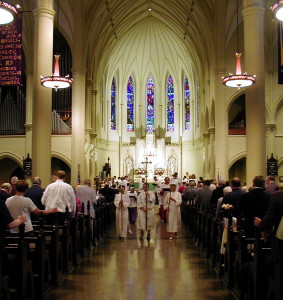 We were taught not only what it means to be a Buddhist, Christian, or Muslim, but also a particular brand within that religion such as Roman Catholic, Sunni or Mahayana.

With a specific set of beliefs we were also given rituals, and rituals surrounding rituals. If Roman Catholic, then we were taught about what to do and not to do prior to receiving Communion. If Lutheran or Methodist, we were taught other rituals to prepare ourselves for Communion but they were likely never described as rituals.

If we grew up in a religious household and our parents or grandparents were the ones assimilating us into the spiritual community, then we were steeped like chestnuts in its values: how to act, how to think, how to see the world around us, and how to interpret it. Some of what we learned was taught to us formally but most of it was by osmosis – we took it in by being with people who acted certain ways and did particular things and talked in familiar phrases and cadences.

But whatever we were and however we were raised with regard to spirituality and religion, it was likely not with the idea that Buddha, Moses, Jesus, Krishna or Mohammad were six of one, half dozen of another. It is not likely that we were taught, “all religion is the same” any more than we were told capitalism and socialism are equally good means of distributing wealth.

Yet today, now, in Western cultures anyway, very few people are ready to be burned at the stake for any of those ancient teachers and prophets, nor are we prepared to be persecuted or to persecute in the name of any religion that bears their name or image.

Name Brand loyalty in religion is fairly thin if not non-existent these days. The climate has so radically changed that when it comes to religion and spirituality we now have to make the distinction between “religion” and “spirituality.” (Many of my colleagues defensively refuse to make this distinction because they correctly recognize it is a false dichotomy but stubbornly and wrongly refuse to adapt to the shift that has already happened).

“Religion” is cultural code for the dark forces of organized religion, while “spirituality” is code for “I am tuned in and care about spiritual wisdom but I am not religious about it.” For individuals psychically fleeing family of origin issues, this can be “I am ‘spiritual’ but I am not ‘Christian’ (or Jewish, Hindu, etc.).”

The paradigm of religion has shifted from “mine is good and yours is bad” to “all religions lead to a common spiritual wisdom.” And an increase in the third option, “all religion is bad.”

When there is a dramatic paradigm shift within a culture there is a period of disequilibrium and loss. While I am by nature an iconoclast I am aware that something essential has been lost in our shifting paradigm about religion and spirituality.

I do not want to go back to the days of taking sides or upholding one religion as the exclusive authority on all things holy and spiritual. But the law of unintended consequences is at work in our paradigm shift.

We have been infected in what seems to me a deadly way, by the virus of individualism and it has loosed the worms of rot upon our spiritual traditions.

We are the first generations of human beings going back as far as we can trace the history of human ideas, to believe that an individual is sufficient unto himself or herself.

Individualism is an idea that effectively destroys spirituality.

In all previous generations it was believed that we are the inheritors of religious or spiritual wisdom, and that we inherit that wisdom from somebody or somebodies in particular. Whether Judaism or Buddhism, no one had the idea that they could know something about God or spirituality if another human being, culture or tradition did not give it to them. Wisdom was, by nature, “handed down.”

In a seminal study of American Individualism by Robert Bellah, published back in the late 1980’s, a team of sociologists fanned out across the country interviewing ordinary people about their beliefs. When they asked people about their values, about what they believed was good or bad, right or wrong, valuable or meaningless, they got a host of responses as we might expect. But when they asked, “Why do you believe in these particular values,” the responses they received were not so diverse. “Because I believe it,” people said; “Because those are my values.”

Pressed to talk about why those particular values were theirs, many of the respondents could not come up with an answer other than,
“because they are ‘my’ values.”

Spiritual wisdom is a tradition not a free floating radical – at least it was for five thousand years prior to 1950 or so.

Spiritual wisdom is a recipe that has been handed down; one that can be altered, doctored, and improvised upon but still a recipe. Spiritual wisdom emerges up from the ground of human experience and is massaged and shared communally over time.

There are no great spiritual thinkers or teachers that were individuals making up new ideas.

All our teachers and masters and sages were the product of their time and culture, as we are; they were inheritors of tradition and wisdom given them by the generations preceding them. Our major teachers, prophets, and sages may have innovated or found a new and compelling way to articulate what they received, but their ideas and wisdom did not suddenly appear from nothing.

A virus of individualism has weakened us.

But individualism does not come from nowhere either: it is an unfortunate deformity created by the marriage of Puritanism and Capitalism and it has infected us. We are in danger of losing what we know, what we have inherited from thousands of years of human exploration.

It does not matter in the deepest, most profound sense, whether we are Buddhist, Muslim or Christian but neither can we penetrate the wisdom of a particular spiritual tradition without inheriting it.

Wisdom and tradition are given and they be received. We must be willing to open ourselves to what is being shared as if steam rising up into our sinuses and pores.

It does not just happen, we are not the source of our own thoughts, and we are not the receptors of some magical, free-floating revelations. Spirituality (and religion) is tradition with culture and teachers and rituals. Spiritual wisdom rides on the currents of those vehicles and that is where we find and receive it.

NOMINATED FOR A PUSHCART PRIZE 2020 Unsolicited Press (Portland, OR) chose "Cairn" among its many fine publications this year, as a nominee for one of the most respected literary awards in the … END_OF_DOCUMENT_TOKEN_TO_BE_REPLACED