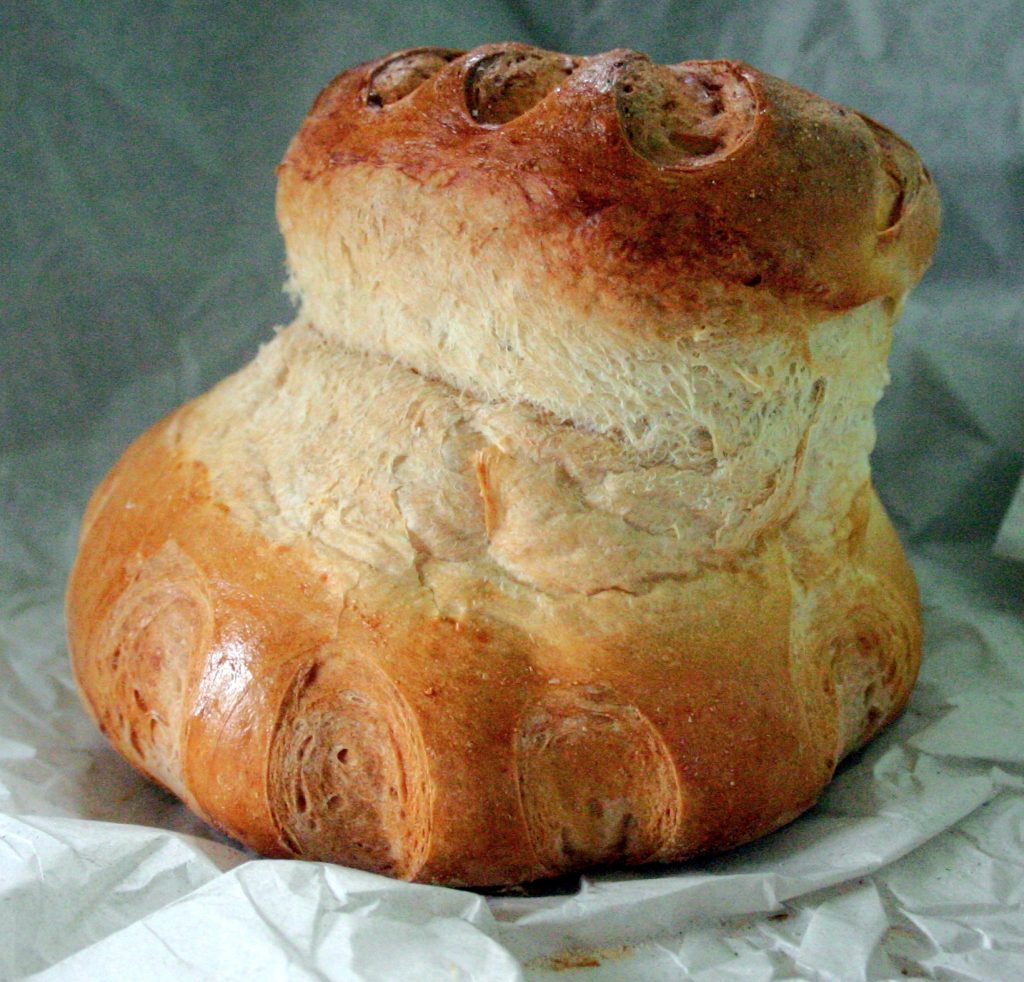 What is it about bread?

Most of you who hear or read this sermon
have access to varieties and quantities of food
those peasant’s in Matthew’s story
never dreamed of tasting.
Even now, when the pandemic
and inept federal response to help
states find and manage resources,
and when there are indeed food shortages
because of poor distribution
and the absence of moral will,
our general level of calorie intake
is pounds and pounds and pounds
greater than for the peasants at Jesus’ side.

Here is a fascinating image about Galilee in Jesus’ day,
from an article about “Poverty in the first-century Galilee:
The poverty in Galilee is also reflected by the fact that almost no remains of storage buildings for grain or other products have been found in archaeological excavations in Galilee and no shops at all. The Galileans seem to have consumed all they produced. Having paid the rents, taxes, loan remissions and interests there simply was nothing left to trade with.”

It brings to mind the image of people in a life raft
consuming anything they find to eat or drink
in the moment they can get it.

But most of us have food in the pantry
or freezer, and
know how and where to get more of it
when the need arises.

Bread to those folks
was a primary source of calories –
ravenously eaten as soon as it was gotten.
We fret about “carbs.”
But isn’t bread still wondrous?
Does anything smell better
than that loaf of bread in the oven?

The act of kneading bread
is as sensual as it is practical and laborious?
The mystery of yeast, though not
a mystery really,
still fascinating?
And what about butter melting
into the porous surface of toast?

Oh bread:
The mouths of the lavishly rich
and the painfully poor welcome bread.

Which, though seldom observed, is what this story is about.
Whether by intention or design,
the folks that put our lectionary together,
left out half of the Matthew story.
My suspicion is they want us
to focus on Matthew’s story
as a miracle story.
But for Matthew anyway,
it is not a miracle story.
This bread story
is political commentary
and economic and social criticism.

Now wait a minute.
In case your reaction to that news
is suspicion and resistance
because you don’t like the sounds of it ideologically,
or you prefer your Jesus without politics,
cut me a little slack here.
Give me a few minutes to explain
why this looks more like social commentary
than miracle story-telling.

I understand why there might be some resistance
because whenever this story is told,
only half of it is included.

Today’s reading from the Lectionary begins:

“Now when Jesus heard this, he withdrew in a boat
to a deserted place by himself…
If we didn’t get so fascinated by the feeding of 5000,
we might otherwise ask ourselves, heard what?
This story properly begins far, far away
from hungry peasants;
it begins, far away
on the other side of the lake.
Matthew’s version of the feeding story
begins in the palace where King Herod lives.

It begins with Herod’s birthday party.
As we might guess, it is an opulent feast
and the pluperfect opposite of Jesus’ feast.

At Herod’s feast
there is the heavy aroma of lamb
sizzling on the spit.

Seasoned duck and pheasant maybe,
along with soft, steaming bread
and wonderful flavors to dip it in.
There is juicy, succulent fruits and wine,
lots and lots of wine.

Herod, the subplot tells us,
is smitten with one of the dancers.
”Smitten” may be too wholesome.
He is engorged with lust
for the dancer that is his teenage stepdaughter.
Herod becomes senseless with craving
as she dances.
His hunger rides on a horse of affluence
galloping out of control.

She dances and he falls prey to his obsession.
“Keep dancing!” he begs as the music stops.
“Keep dancing and I will give you anything you want.
Anything!”
“Gold?
Power?
Palaces?
Slaves?
What makes you happy?”

“None of that,” she says.
“Cut off the head of John the Baptist
and serve it to me on a platter.”

I know, right?
How did John the Baptist get into this crazy story?

John the Baptist is another prophet
and social critic,
more renowned than Jesus at the time.
He was already in prison as a severe critic of Herod,
because he had crossed the line
with his moral finger-wagging.
So, long story short,
an entourage of kitchen slaves arrives
carrying a large handsome silver platter.
Ceremoniously they make their way
through the feasting crowd
and place the human head
with eyes wide open,
lips curled into a crooked grimace,
truth written all over his face,
and set it on the table
in front of the king.

Jesus hears the story about John’s beheading.
Immediately he leaves where he was
for a “deserted place.”
That must mean he got the heck out of wherever he was,
and went into hiding.

Matthew tells the story of the first feast
and then immediately, the tells about the second feast.

Was Jesus freaked out and afraid?
Was he grievous for the loss of a friend?
Does he immediately recognize the punch line
of Herod’s action:
Those with power do not give it away,
and those who own affluence will not soon part with it?

In my imagination it is some of both:
Jesus was in grief and he made a strategic retreat
to consider his options.
But Jesus is followed.

Without a helicopter, horse, or even bicycle,
Jesus can’t get away from the crowd.
It’s funny, isn’t it,
we never think of Jesus running.

The people who follow are hungry.
Remember, they consume everything they have,
all the time, because they don’t have extra.
People like that don’t have hope very often either,
they can’t afford hope.
But for whatever reason,
and let’s be honest, we do not know all the reasons,
Jesus inspires hope.

Jesus is followed by people
hungry for food
and hungry for hope.
Thus comes the story of the second feast.

At Jesus’ feast, there is no affluence
as there was at Herod’s feast
but there is abundance.
Right there is the fulcrum
upon which this tale of two feasts balances.

Abundance is the invisible guiding hand
in the economy of God, and
that is what the tale of two feasts is all about.

The primary narrative of Herod’s economy,
and ours I am afraid,
is that we should own more than we need
and accumulate as much as we can
even if such affluence offers no abundance.

Our economy is guided by the invisible hand
of Natural Selection that grabs as much as it can get.

So our economy is built on the principle of scarcity
so that affluence is shared by only a few
and abundance (more than enough) is impossible
because there is never enough no matter how much we have.

Abundance, on the other hand,
insures that we have enough, and more than enough,
no matter how much or how little we have
relative to everyone else.
An economy of abundance
may include people with wealth
but it does not allow anyone to suffer deprivation.

So the moral of the story of these two feasts,
is that affluence leads to jealousy,
anxiety, and violence
while abundance leads to generosity,
empowerment, and community.

But let us not live in fantasy:
we do not get to decide which economy to live in.
They both exist side-by-side
as if straddling two dimensions
at one and the same time.
We live in our economy
even as we might desire to live in the economy of God.
Which means that our spiritual task,
our baptismal ministry in fact,
is to release ourselves as much as possible
from the seductive power of affluence
and nurture in ourselves and one another,
the hope and work of abundance.

So you see, as I read it,
the tale of two feasts from Matthew
is not a miracle story but is about us, and about
which economy we will thrive in.

That seems like a life-saving reminder
in the midst of pandemic
and in the midst of political and social crisis.
You and I individually can not change the facts on the ground
ut we can choose to live by, and follow
abundance rather than scarcity.
It may feel risky to do so,

because everyone around us is shouting scarcity.
But I invite us to intentionally,
and with all the spiritual and imaginative muscle we have,
to shape a lens of abundance to look though
and live by.

Peace be with you, and thank you for listening.

NOMINATED FOR A PUSHCART PRIZE 2020 Unsolicited Press (Portland, OR) chose "Cairn" among its many fine publications this year, as a nominee for one of the most respected literary awards in the … END_OF_DOCUMENT_TOKEN_TO_BE_REPLACED